How has squatting contributed to the production of art and culture? During times where the cost of rent and living rises well beyond the ability of cultural workers to support themselves in the metropolis, squatting has played an important role in making possible the continued existence of autonomous art and culture.

Come and join us for this daylong event that will seek together to bring materials and experiences of how occupations and squatting have contributed to the production of autonomous culture. From social centres to free schools, temporary galleries to combined studios and living spaces, we invite people to bring along materials from your projects that explore these questions and connections.

We will be joined by historian and activist Alan W. Moore, who has been working on setting up and documenting these spaces and practices for almost forty years. We will start with an informal lunch and sharing of food, spending the afternoon working through and discussing materials that are brought, and then in the early evening Alan will present his new book on the subject, Occupation Culture: Art & Squatting in the City from Below, and the recent anthology Making Room: Cultural Production in Occupied Spaces. 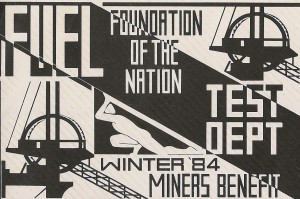 Marking 30 years since the 1984-5 miners’ strike, DS30 is a political collage of sound and image. The film is set within the monumental structural lines of Dunston Staiths built on the River Tyne in 1893 to ship coal from the Durham coalfields to the world. Featuring footage of mining communities and industry along the River Tyne and of the wider mining community together with footage and sounds from Test Dept’s own archive related to the strike, DS30 reflects on the group’s nationwide Fuel to Fight Tour in support of the miners, during which they collaborated with local activists and mining communities. These included Kent miner Alan Sutcliffe, who performed as writer and guest vocalist on live and recorded material and the South Wales Striking Miners’ Choir, with whom they recorded the album ‘Shoulder to Shoulder’ to raise money for the Miners’ Hardship Fund. END_OF_DOCUMENT_TOKEN_TO_BE_REPLACED

A new documentary feature film by Michael Wayne & Deirdre O’Neill
There will be a Q&A with the directors after the screening.

Everything changes and yet everything stays the same. 1844: Friedrich Engels writes his book The Condition of the Working Class in England, a classic denunciation of the appalling living conditions for working people living at the heart of the industrial revolution in Manchester, England. In 2012: a group of working class people from Manchester and Salford have the job of devising a theatrical show from scratch based on their own experiences and Engels’ book. They have 8 weeks before their first performance. The Condition of the Working Class follows the process from the first rehearsal to first night and situates their struggle to get the show on stage in the context of the daily struggles of working people facing economic crisis and austerity politics.

The Politics of Workers’ Inquiry Conference
May 2-3, 2013 @ University of Essex

Workers’ inquiry is an approach to and practice of knowledge production that seeks to understand the changing composition of labor and its potential for revolutionary social transformation. It is the practice of turning the tools of the social sciences into weapons of class struggle. Workers’ inquiry seeks to map the continuing imposition of the class relation, not as a disinterested investigation, but rather to deepen and intensify social and political antagonisms.

This conference brings together various aspects of workers’ inquiry, from its historical origins and development to contemporary mutations and adaptations of it within contemporary struggles. It will expand the terrain and form of workers’ inquiry, focusing on topics including inquiries into cultural labor and the service economy, geographies of class conflict, transformation in value production, and the limits to workers’ inquiry as a political/research method. END_OF_DOCUMENT_TOKEN_TO_BE_REPLACED

Minor Compositions  is launching a workers’ inquiry into the shaping of creative, cultural, and artistic labor in the metropolis. We are currently searching for accomplices and comrades to take part and further develop this investigation. Description and more information below.

The Metropolitan Factory: making a living as a creative worker
Short survey on creative labor  END_OF_DOCUMENT_TOKEN_TO_BE_REPLACED

With the Arab Spring, the Spanish indignados, Occupy and so much more, 2011 is likely to go down in history as a very special year – perhaps even the beginning of something. But what would that something be? This presentation attempts to draw some conclusions about the present state and future of politics and organization by examining the practices of the movements that erupted in the last year. Thinking beyond their usual representation by the media, trying to avoid either describing them as something entirely new and unheard of or as manifestations of an ultimately non-political culture, what can be the lessons of 2011?

END_OF_DOCUMENT_TOKEN_TO_BE_REPLACED

Many observers argue that the change induced with the internet is on a par with at least the effects of the printing press, which was instrumental in creating a cascade of changes such as the renaissance, the reformation and the Enlightenment, culminating in the replacement of feudalism with capitalism. It is therefore reasonable to posit a phase transition this time as well, but what kind of transition and on which timescale? This is the question we want to address. Our first answer is that the emergence of a new hyper-productive mode of value creation, i.e. commons-based peer production as, a new ‘mode of production,’ and its co-emerging institutional framework, illuminate us about the incipient ‘patterns’ of the emergent new social order.  END_OF_DOCUMENT_TOKEN_TO_BE_REPLACED

What would commodities say if they could speak? Marx’s question can seem playful in some registers. And yet, objects voice themselves not only through our playful – or rueful – gaze.  If Marx had listened long enough, these talking commodities would have announced the traumas of their exploitative and violent birthing to him. Likewise the rise of consumer culture, the proliferation and intensification of the commodification, can be understood as the expansion of the violence of accumulation all across the social field. Today the critique and denunciation of these forces have become yet another commodity in the spectacle; something we witness today in the backlash against banks, bankers and speculators and all the glorified preening of capitalist consumption they stand for. Is this trend, then, the ‘new spirit of capitalism’? END_OF_DOCUMENT_TOKEN_TO_BE_REPLACED

I’m so broke I can’t even pay attention: Rethinking Social Wealth In & Against Times of Austerity
March 27th, 2011, 1PM @ The Co-Prosperity Sphere, Chicago

Tom Waits once quipped that he was so broke that he couldn’t even pay attention. While Waits is not typically thought of as a theorist of crisis, in a strangely prescient way this describes condition of economic and social crisis that we live through today. It gestures not only to the apparent lack of financial resources used to justify the imposition of austerity measures, but also corresponding a lack of time, affect, and care. We find ourselves not only struggling to keep up with bills, debt, rents, and work – but the intensification of these dynamics leaves us with less time and energy for relating as social beings rather than economic agents. Thus a financial crisis becomes an economic crisis, and then a crisis affecting the very fabric of social relations.

Economic and social crises are not only moments of rupture, upheavals in daily life, but also moments that clarify what is truly important. For economic elites this means reinstating forms of class power that had been held in check, but from a different perspective or it represents a reclaiming of enclosed resources and commons. It is to declare, as the slogan goes “We won’t pay for your crisis.” But in confronting the declaration that we live in times of austerity, it is not enough to simply denounce them (as important that is), but also to rethink what is important. END_OF_DOCUMENT_TOKEN_TO_BE_REPLACED

Over the past fifteen years the idea of precarity has emerged as a key area of social conflict and political organizing. But what is precarity, and what does a focus on it mean for political organizing and social movements? Come join us for an evening of discussion with members of the San Precario network on the politics of precarious labor and what they could mean for US based movements and campaigns.

The San Precario network is an Italian group of activists, collectives, social centers and workers that is one of the main organizers of the Milan EuroMayDay Parade. They will be presenting materials from their campaigns and work. END_OF_DOCUMENT_TOKEN_TO_BE_REPLACED