The Final Countdown: Europe, Refugees and the Left
Edited by Jela Krečič. 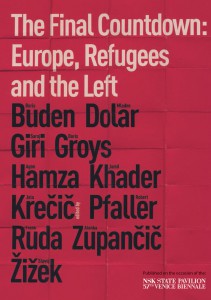 There is a commonly accepted notion that we live in a time of serious crisis that moves between the two extremes of fundamentalist terrorism and right wing populism. The latter draws its power from the supposed threat of immigrants: it proposes to resolve the immigrant crisis by placing the blame on the principal victims themselves, that is to say, on some form of otherness (immigrants, Islam, the LGBT community and similar). The predominant leftist position, which advocates multicultural tolerance and understanding, is no match for such aggressive populism.

The premise of The Final Countdown: Europe, Refugees and the Left is that our situation is indeed extremely dangerous, that near unimaginable catastrophes are lurking on the horizon, but that these new dangers also open up new spaces for radical emancipatory politics. Eleven distinguished thinkers take these perils as a challenge to provide sharp, specific analysis of our social and political predicament, combining a merciless critique of the prevailing leftist humanitarian approach with elements of a new vision for the Left.

The Final Countdown is therefore also a countdown to a new beginning; it is a practice of theory that is not here to lament but to re-think and reframe the very basic coordinates of how we understand and deal with today’s major political issues. 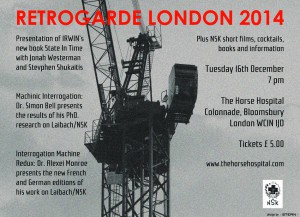 State in Time
Edited by IRWIN

Become a citizen of the first global state of the universe!

The NSK State in Time emerged in 1992, evolving in the context of the dissolution of Yugoslavia and the transformation Neue Slowenische Kunst. Existing both as an artwork and a social formation, a state that encompasses all time but holding no territory, the NSK State in Time has for two decades pushed the boundaries of artistic and political practice. This volume collects together, for the first time, analyses of the NSK State in Time including its relationship with the changing context of Eastern Europe, the connection between aesthetics and the state, the rise of NSK folk art, and documents the First NSK Citizen’s Congress in 2010.